We’re proud to announce the launch of a brand-new media enterprise, called The Hightower Download! 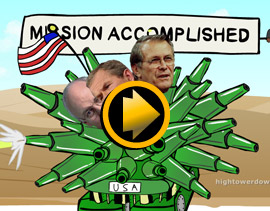 Every week, we’ll be releasing a new video animation featuring Hightower– and our first episode is a must-see: “Bush’s Backfire.” Is there that sums up the stubbornly disastrous administration of George W better than the Iraq debacle? Especially in light of last week’s announcement on upping the number of troops deployed to the civil war that Bush himself created!

You can also sign up to get sneak previews of each week’s episode– which means you’ll get to watch a day before the rest of the world does. So then: what’re you waitin’ for? Head over to The Hightower Download and get on board!