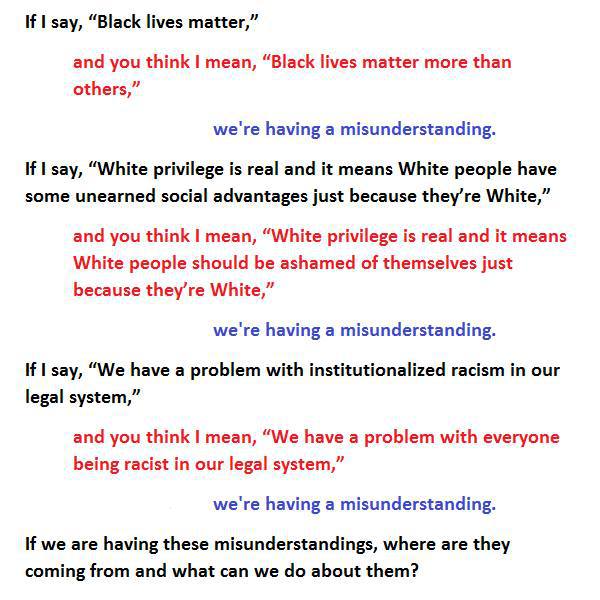 When people hear me talk about populism, some folks think I’m talking about the racist, xenophobic, angry things that get branded as populism. True populism is about bringing people up, not tearing them down. True populism is multiracial and transracial. The #BlackLivesMatter movement is about acknowledging the brutal, painful injustices our Black sisters and brothers have endured and are continuing to endure. When we talk about #BlackLivesMatter, some people hear that we don’t think “all” lives matter. Supporting #BlackLivesMatter, especially in the face of these killings by police officers, doesn’t mean that no one else matters. It means that we white people haven’t done justice by our brethren of color, and it’s time that we step up to the plate. All of us. Together.

Yet again, the political and media establishment (excuse the redundancy) misconstrue “populism” as an ignorant and bigoted political fringe. The working-class people of Great Britain have every right to be upset and frustrated with their government: austerity and corporate cronyism, just as it has here in the US, has brought people to their knees. But with ‪#‎Brexit‬, they’ve been bamboozled into believing that their troubles lie with immigrants and EU fees, not with their own elite– the aloof bosses, bankers, big shots, bastards, and bullshitters who think they are the top dogs and the rest of us are fire hydrants. Want to understand what real populism is? Check out this introduction we’ve got over at the Hightower Lowdown:

All of these (and more) have added up to an enthronement of the rich and the normalization of inequity. They threaten to squeeze the life out of America’s core values of democracy, equality, and justice.

But there is a medicine to fight this disease, a powerful antidote deeply entwined with our nation’s history: populism—a political doctrine rooted in the rebellious spirit and commitment to the common good of ordinary, grassroots Americans. Time and again throughout our country’s history, populist rebellions have been sparked when ordinary folks were being run over by abusive concentrations of power. And so it is today: hundreds of thousands of Americans—young and old, white and black and brown—are again speaking up and standing against the armed robbery of the people’s rights and the grand theft of the American Dream. That is populism. 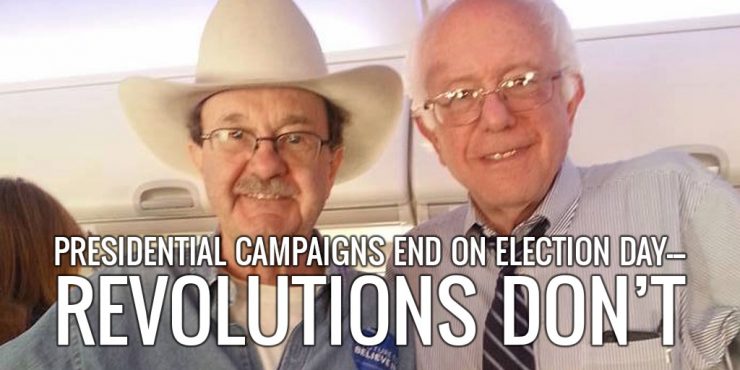 About 20 of us spent 4 hours or so talking with Bernie Sanders about BernieNext, not looking back, but at how far this grassroots populist movement has come in only 15 months. Everyone there is very excited about continuing the rebellion into congressional and local elections and issue campaigns next year, 2018, 2020 and beyond. This year’s phenomenal achievements are only the start. Presidential campaigns end on Election Day–revolutions don’t! 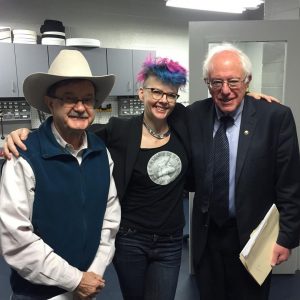 That’s me in between a couple of pretty cool dudes.

Hey folks! It’s Deanna, the resident nerd, here with some exciting news: we’ve got ourselves a couple of brand-new websites. So many updates to share with you! END_OF_DOCUMENT_TOKEN_TO_BE_REPLACED

Hightower was on Washington Journal this morning to talk about why he’s supporting Bernie, and answer questions from callers. (Our favorite is the woman from South Carolina who asked if Hightower is a lawyer… wait for it.) Here’s the full show: