THE 8,000-MEMBER GREATER GRACE TEMPLE in Detroit is the home church of many autoworkers, and its Sunday service on December 7 spoke directly to their troubles. The tone was set by the choir’s opening selection, “I’m looking for a Miracle.” The Pentecostal pastor kept the spirit moving with a sermon he titled “A Hybrid Hope,” after which the congregation joined in a full-throated, hallelujah version of the gospel classic, “We’re Gonna Make It.”

For the men and women who actually do the work in automobile manufacturing (America’s quintessential industry), the only hope left for dealing with a catastrophic economic meltdown seems to be prayer. Their corporate leaders have failed them, and Congress has stiffed them. Only last month’s begrudging agreement by the White House to consider a $14 billion bridge loan for the Big Three automakers has given them any optimism as their industry limps into 2009. But the ongoing bailout battle is no longer about economics. It’s about class in America. 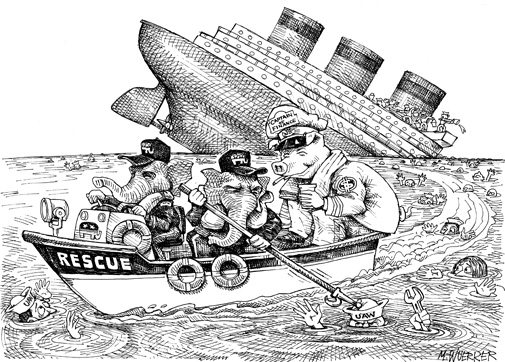 Republican lawmakers, backed by a raucous chorus of right-wing pundits and corporate lobbyists, have turned Motor City’s economic woes into an excuse for launching a mendacious and pernicious assault on America’s hard-working, highly skilled, unionized working families–and on the middle-class ideals that they embody.

Read the rest of this issue at The Hightower Lowdown.